Learnings For you > Blog > Blog > Alberta COVID-19 restrictions remain in place until Jan. 21 as students head back to class Monday | Globalnews.ca

Alberta COVID-19 restrictions remain in place until Jan. 21 as students head back to class Monday | Globalnews.ca 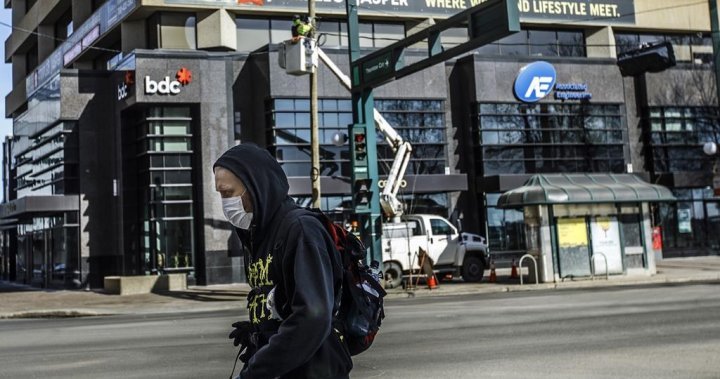 Premier Jason Kenney said Alberta students who have chosen to learn in-person will head back to class next week, as originally planned. All other COVID-19 public health measures that are in place will remain in place until at least Jan. 21, the premier added.

Kenney said businesses will be given at least one week’s notice should changes be made to the current public health restrictions.

Current restrictions put in place in mid-December include a ban on in-person dining and limit grocery and retail stores to 15 per cent of their fire capacity. These restrictions, which went into place on Dec. 13, also forced the closure of personal services like gyms and hair salons.

Other measures, which ban both indoor and outdoor gatherings and mandate masks province-wide, were implemented on Dec. 8.

The announcement came as Alberta reported 968 new cases of COVID-19 Thursday, along with 24 additional deaths from the disease. Alberta’s death toll from COVID-19 has reached 1,217. (Additional daily COVID-19 data below).

Kenney took to Facebook live Wednesday night to address questions from Albertans, at which time he said the province in not in a place right now to relax the current restrictions, citing high daily new cases and hospitalization rates.

“I’ve made it clear in the past that we have to balance the public health imperative of COVID off against all of the other impacts of restrictions, and that will inform our decisions going forward,” Kenney said Wednesday night.

Kenney used a graph to showcase the spike in COVID-19 hospitalizations since October, which have seen exponential growth. He pointed out that in mid-October, there were about 100 people in hospital with COVID-19. That number went “almost straight up to 650 about a month later,” Kenney said.

There were 871 Albertans in hospital with COVID-19 Thursday, 139 of whom were being treated in intensive care.

“We can manage that thanks to the great professionalism of our folks in the health-care system,” Kenney said.

“But we cannot manage, we could not manage continued exponential growth because once we were to hit like 2,000 or more COVID patients in hospitals, we have to cancel all surgeries that are not essential with massive damage to other people’s health. So tough measures had to be taken, sadly, and we said that the December measures that were brought into effect, I think on Dec. 14, we would assess those a month later and I’ll have more to say about that tomorrow.”

Kenney added that he hopes to get back to a regionalized approach to COVID-19 restrictions, “as soon as the numbers are in the right space.”

“But right now, we continue to lead the country in per capita new cases, active cases, and I believe fatalities, daily fatalities as well. Not overall. We are still lower than the national average since March, but on a day-to-day basis, we are ahead of other provinces.”


Dr. Colin Furness, an infection control epidemiologist, told Global News now is not the time to lift restrictions, saying while Alberta has managed to slow the daily count number, that’s not enough.

“You have jumped out of an airplane. You’ve opened your parachute, the parachute has slowed your fall. Now you have to decide whether to take the parachute off or not,” he said.

“If you’re halfway to the ground and you take the parachute off, I think the result is going to be quite predictable. Most people would say you should keep the parachute on until you hit the ground.”

Dr. Stephanie Smith, an infectious disease physician at the University of Alberta Hospital, said her preference would be for the current restrictions to remain in place for at least another four weeks.

“Then we would be beyond the Christmas, New Year’s period and I think we have a much better idea of trends and numbers,” she said, adding there was a dip over the holidays that could be due to not as many people being tested.

“At this point in time, and our numbers haven’t gone up, but I would like to see that trend continuing or at least a slight decrease in numbers before government decides to ease restrictions.”

Ontario made the decision Thursday to keep schools closed to in-person learning until Jan. 25.

Kenney said the decision to stick with the original back-to-school plan announced in December was based on “carefully considering the importance of attending school in-person” and the fact COVID-19 case counts declined in all student age groups in December.

Dr. James Kellner, a pediatric infectious diseases physician at the Alberta Children’s Hospital in Calgary, said he believes a return to in-person learning in Alberta should be delayed given daily case rates remain high, as well as the number of severe outcomes.

“There’s plenty of reason to be concerned and I’m certainly concerned about the idea of having children return to the classroom as early as next week,” he said.

“Here in Alberta it’s somewhat leveled off, but leveled off at a very high level — far higher than it was in the autumn when schools first opened.”


Kellner, a parent himself, admitted it’s a difficult situation. He added he understands the challenges of leaving schools closed, including the children’s social development and mental health.

“With that in mind… I worry that if we open the schools too soon that it could lead to — instead of plateauing and gradually starting to go down — it could contribute to an exasperation of a prolonged second wave that we’re in.”

Kenney said the number of active cases in Alberta has dropped “pretty substantially” since the latest restrictions were announced in December, but said “we’re far from getting out of this.”

Of the 24 deaths reported Thursday, 14 were in the Edmonton zone, nine were in the Calgary zone and one was in the Central zone.

The death in the Central zone was a man in his 50s with unknown comorbidities.