York U Class of 2021: A pandemic can’t keep this Tamil grandma from graduating | York Media Relations

TORONTO, Nov. 1, 2021 – Varathaledchumi Shanmuganathan, known as Varatha, is among more than 4,000 resilient students — some young enough to be her grandchildren — who will celebrate their graduation during York University’s virtual fall convocation tomorrow. 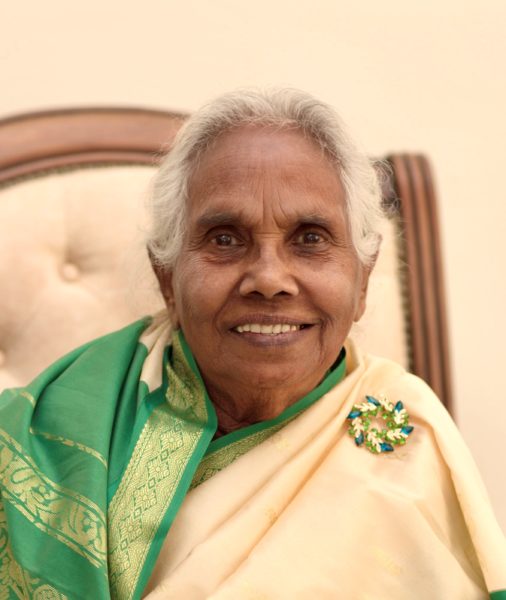 It is an extra-special occasion for both York and Shanmuganathan, as she earns the distinction of becoming the oldest person to receive a master’s degree from the University — and one of the oldest women to obtain a graduate degree from a Canadian university.

Born in Velanai, a small village in Velanai Island off the coast of Jaffna Peninsula in northern Sri Lanka, Shanmuganathan has lived in and taught in four continents, though her education could have very well ended before entering the postsecondary education system. Despite passing with distinction in intermediate-level schooling, she was unable to continue higher studies in her native land because there were limited seats available for ethnic-and-gender-minority students at that time.

“One of my teachers advised my parents to send me abroad for college education. So, they sent me to India,” says Shanmuganathan, who got her bachelor’s degree from University of Madras, in Tamil Nadu state. Upon returning to Sri Lanka, she taught Indian history and English at a local school, and eventually received a diploma in education from Ceylon University. However, her ambition to study further came to a pause when her father became ill and she had to take care of the family’s affairs. She then got married to a teacher and they moved out of Sri Lanka, seeking better opportunities.

Fast forward, Shanmuganathan immigrated to Canada in 2004 — via Ethiopia, Sierra Leone, Nigeria and the United Kingdom — when her daughter sponsored her. It’s no surprise that her quest for acquiring further knowledge was rekindled when she heard from a relative about York’s tuition waiver incentive for seniors. Encouraged by her daughter who is an MBA graduate from York’s Schulich School of Business, Shanmuganathan applied to join the master’s program in political science.

Shanmuganathan submitted a compelling statement of interest for returning to grad school as a student after more than 30 years. The statement starts like this: “My interest in politics is something that I grew up with as World War II started when I was five years old in Ceylon, later named Sri Lanka. I understood the impact that war and violence involving multiple nations can have across oceans.”

At age 85, she was accepted into the program in the Fall/Winter 2019 session. “It was a great change for me to go into the campus, walking in hallways, reading at the library … and do things like youngsters. I loved it!” she says. “Every time I was on campus, it felt like I was in a temple. Very peaceful and rejuvenating.”

The Vaughan resident also quips about how the cab drivers and others she encountered during her commute to the campus thought she was a professor at York and were surprised when they learnt she was a student. “I was very proud to tell them I was indeed a student. I believe in lifelong learning for seniors, educating themselves beyond conventional limits placed on them in society,” says Shanmuganathan.

She completed her first master’s degree in her mid-50s at the University of London’s Birkbeck College, where she taught English and economics, before finding a niche in teaching English as a Second Language (ESL). While her first master’s was on the attitudes of Sri Lankan Tamils in England towards language, partially driven by the community’s need to belong in new cultures and political situations, for the York degree, she chose studying non-violence for national peace building and reconciliation in Sri Lanka.

“I grew up in the time when Mahatma Gandhi led India’s Independence. In my teenage years, Gandhi’s ideas and teachings as to how non-violent methods could be adopted in politics, in theory and practice impressed me very much,” she remembers, adding that later in her life she was also influenced by the principles former South African president Nelson Mandela and Tibetan Buddhist leader the Dalai Lama. “I was intrigued by the philosophy behind politics as a science.”

Shanmuganathan defended her major research paper via Zoom, on the causes of the civil war, peace processes and the prospect of peace in Sri Lanka. “The war has ended but there’s no peace unless and until the grievances of Tamils are properly resolved. Power sharing and stake in the constitution will bring peace,” her paper concludes. “There is peace in the horizon, but it will take a long time to achieve.”

Though her in-person campus experience was cut short by the pandemic, Shanmuganathan says she was determined to complete what she started. The transition to online learning was a bit difficult in the beginning, especially with a four-year-old grandchild in the house and her daughter and son-in-law working from home, but she was able to quickly adjust to the new normal.

“Anything I start, I will finish. Always,” says Shanmuganathan, who plans to write a book based on her research, on post-war Sri Lanka and prospects for peace.

York University is a modern, multi-campus, urban university located in Toronto, Ontario. Backed by a diverse group of students, faculty, staff, alumni and partners, we bring a uniquely global perspective to help solve societal challenges, drive positive change and prepare our students for success. York’s fully bilingual Glendon Campus is home to Southern Ontario’s Centre of Excellence for French Language and Bilingual Postsecondary Education. York’s campuses in Costa Rica and India offer students exceptional transnational learning opportunities and innovative programs. Together, we can make things right for our communities, our planet, and our future.